Patriotic Pillows...just in time for the 4th 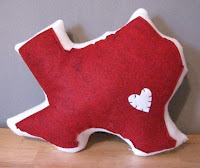 Texas native, Christin Morgan, represents for all states in her line of super fun, hand-stitched felt pillows.  Grab yours now in time for the 4th: http://www.etsy.com/shop/lovecalifornia

I recently caught up with the California transplant who has plans for greenness and goodness: recycled felt and non-profit donations are on the way...
Posted by Tasneem at 10:12 AM No comments:

This vanilla frosting is a great basic, and you can use it on cake, cupcakes, or on your french toast...yum.  Refer to my notes on butter substitutes before you begin, and be sure to use a mixer.

Email ThisBlogThis!Share to TwitterShare to FacebookShare to Pinterest
Labels: Dessert

The last flavor people think of when they bake cupcakes is pistachio, but the truth is, this lovely green cupcake should be higher on the list of cupcake possibilities.  A few notes before you begin: first, stevia may be used, but only if you can deal with the aftertaste.  I recommend that you do half or three-quarters agave and 1/4 or 1/2 stevia.  Second, I highly recommend a mixer for this recipe, it's very thick.  Third, you can replace butter with one of three items: 1) apple sauce: 1:1 ratio, 2) low-fat butter: try the french brand they sell at trader joes (it comes in a little white container), 3) substitute half the butter with low-fat vanilla yogurt - do not do a 1:1 substitute. Fourth, you do not have to integrate the rose - some people just can't get down with this flavor - it's ok!

Finally, be sure to frost these cupcakes!

Nobu is one of my favorite sushi joints ever, and the chance to win a free trip to Nobu NYC compliments of AT&T is even better...enter the contest here: http://www.ypmobilewin.com/?or=tasb
Posted by Tasneem at 11:12 AM 1 comment: